Get fresh music recommendations delivered to your inbox every Friday.

from tour demo 2012 by Spoonboy 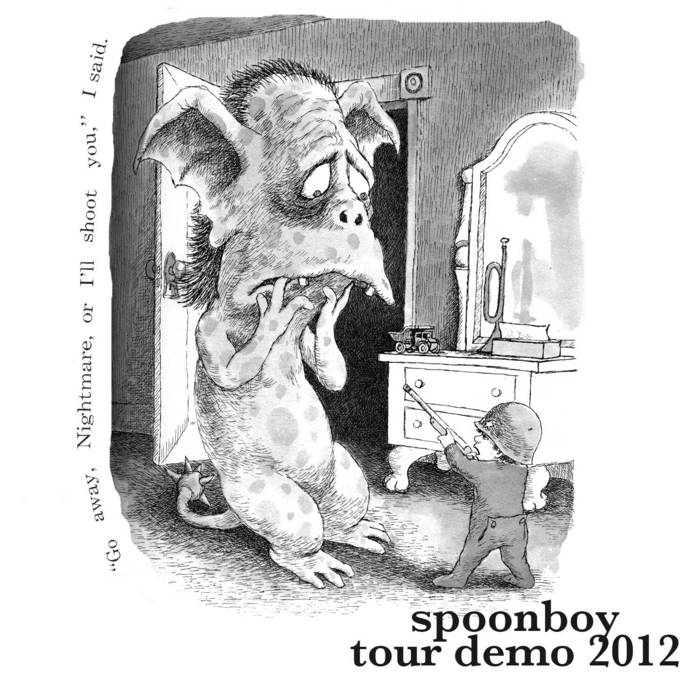 linus and me, we were talking about first loves
how they burn out, leave you charred and then changed completely.
i thought about that one summer burning in the suburbs.
me and caroline making eyes and waiting on the subway.
she'd sought me out like the stamp that finished her collection,
like a dying breed in danger of extinction,
and we fell into each other without the slightest bit of caution,
until the whole thing fell out from under our feet
i see caroline sometimes walking down the street,
and her heads all full up with those people she meets,
i wanna call out and say "hey thanks for everything caroline"
but she don't go by that name no more…

tommy and me, we had committed a crime,
not a lot to it, just something we did at the time…
there was war in the air and it troubled my mind,
there were secrets between us but i'd been sure
the things we shared that they were ours
but there was something there i hadn't seen before
when i saw tommy in his military uniform i knew:
he'd been looking for a war.

it took a while thinking about someone new
before i broke and took down that old picture you drew,
you know they say moving on is just something you do,
i don't know, it could be, i think sometimes it just happens to you.
you find your path, and you take that road,
and when you look back, i hope that you know
the things we share, and the ways we grow,
its due to all the people we've known...

Bandcamp Daily  your guide to the world of Bandcamp

Nightmares on Wax and Bremer McCoy stop by with their sublime new LPs.